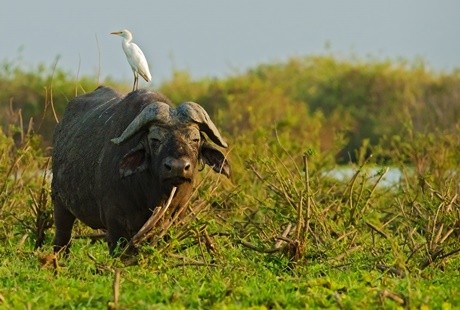 Selous occupies 55.000 square kilometers, and although it is not so well known for being located in southeastern Tanzania, closer to Dar Es Salaam than to Arusha, it is the largest reserve in Africa.

Its territory is bathed by numerous and important rivers like the Rufiji, the Kilomber, the Then and the Ruaha, which prevents a large masses of herbivores concentration. That is not to say that animals will not be seen during a safari in Selous, because in their vast plains live 30 species of mammals and 350 of birds. The largest concentration is that of its 180.000 buffalo.

The park can be visited by 4x4 or on foot, always accompanied by armed ranges, or in boats that go up the Rufiji, the river that leaves the Tanganyika and that, along with the Ruaha, forms a hydrological basin as vast as all Andalusia. Be careful with hippos, who do not hesitate to attack the boats that pass near them, and of course, with the numerous crocodiles.

The best period for safaris in Selous is in the dry season, from June to October. During the rainy season, from April to June, almost all lodges are closed. Swiss Replica Watches