In NEPAL, the Goddess Kumari 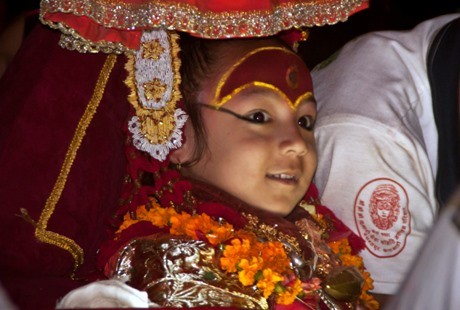 Kumari, which literally means virgin in Nepali, is the goddess who wards off evil spirits and brings good luck. In Kathmandu we  find it, but in this case it is not an image or size, but a child of flesh and bone, which represents the reincarnation of the goddess Kali.

The Kumari candidate must meet 36 virtues that make her "perfect" to be chosen, including the colour of her eyes, the shape of her teeth and  tone of voice.

Once chosen, she lives in Kumari Ghar Palace where she is worshiped by Hindus and Buddhists, receives maximum attention and is educated by the wisest. The Kumari will be unveiled to the great festivals and rarely rear show her head out the window.

A Kumari ceases to be when she has her first period. At that time the selection process begins as follows, among girls of the Shakya caste. Like so many other things, it has its legends, it is said that it's bad luck to marry a former Kumari.