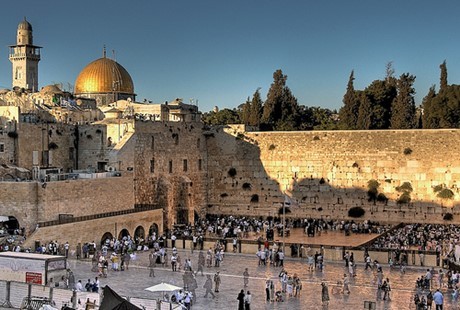 This colossal white stone block wall is the holiest site in Judaism, and the square in front is a permanent place of prayer.

The Wall, whose Hebrew name is Ha-Kotel, is part of the retaining wall of the Temple Mount, which was built by Herod the Great when he expanded the Temple precincts. The stones of the lower part are the date back to Herod, and above belong to the  Islamic period. In Ottoman times the wall became the place where the Jews came to regret the destruction of the Second Temple, and hence its name.

The houses covered much of what is now the Western Wall until recently. When the Israelis seized control of the Old City of Jerusalem, after the war of 1967, they razed the adjacent Muslim Quarter.

Non-Jews can get close to the wall if they dress appropriately and wear a head covering.  Wilson Arch, which is in the left corner of the prayer section is for men only.  A part of the original passageway  leading to the temple, it is now included in a building that functions as Synagogue.