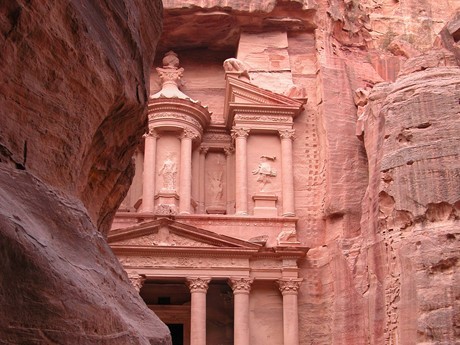 The Treasury, dating back to the first century, is the best known building in Petra, one of the most impressive and magical sites of Jordan.

Through an opening in the dark and high walls of the gorge, called Siq it suddenly appears. The pink facade, so beautiful, unfolds in a moment of stark contrasts and excitement. As the design has no precedent in the city of Petra, it is thought those responsible were Near-Eastern Hellenistic architects

Bedouin folklore named The Treasury, because they believed the Khasneb-Faroun, or treasure of Pharaoh, was the magical creation of a great wizard who saved it in the urn of the facade. The bullet holes that can be seen are believed to be due to the shooting of Bedouin throughout the years, trying to release this hidden treasure.

A colossal doorway dominates the outer court of the Treasury, and leads to an inner chamber. In the bottom of the chamber there is a shrine with an ablution basin for ritual washing, suggesting that the building was actually a temple.