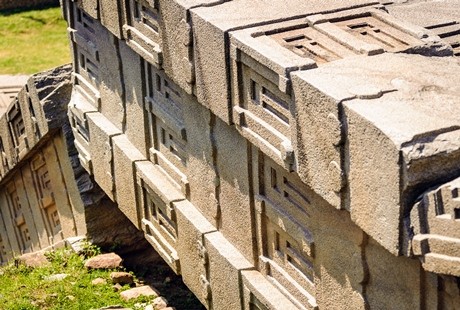 Aksum is the holiest city of Ethiopia. According to legend, here the true Ark of the Covenant, containing the Ten Commandments is preserved.  Legend says it resides in the church of Mary of Zion, inside which a single priest, elected, a direct descendant of the Levites, jealously guards the treasure, and does not allow anyone to touch or see.

The ruins of the lost city of Aksum, near the northern border almost touching Eritrea remain as a reminder of the power held by the ancient Kingdom of Ethiopia,panerai luminor 1950 3 days gmt replicawhich shone among the major powers of I to XIII centuries. Among its ruins, with royal mausoleums, traces of ancient castles, trails, monoliths, and exquisitely carved obelisks. There is a large granite obelisk erected in the IV century, decorated with two false doors at the base, and decorations resembling windows on all sides. It is topped with a semicircular shape, which used to be covered with metal frames.

Outside the city are the remains of the King's House, Pantaleon Monastery Palace and although women can not enter, the outside view is still worth a visit. Outside of the city are the ruins are which are considered to be the old Palace of the Queen of Sheba.

Today, Aksum represents the most important pilgrimage centre of the country, in fact it could be considered the heart of the Ethiopian Orthodox Church.