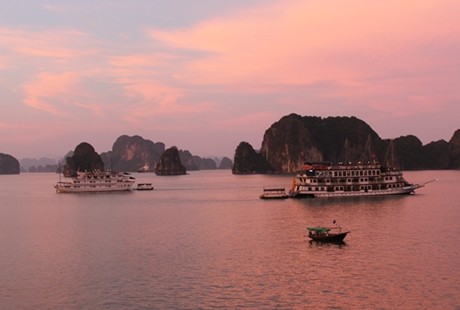 This is the middle of our summer and Halong Bay remains a rather peaceful place to visit. A few boats are anchored in the Bay during the day and at night while the number of visitors rushing to some of the most famed sites, from natural caves to beaches to strange limestone shapes.
Of course, tourism is piece by piece reshaping life around Halong Bay, particularly at Ha Long City and Cam Pha Town. The first private funded marina has been added near to Halong Bay, and a seaport is now due to come as cruise ships start to be increasingly seen in the waters of the Bay. According to tourism authorities, some 100 cruise ships were recorded last year.
Tourism is indeed a serious business for Quang Ninh Province. They receive in a year 7.5 million of travellers a year of which some 2.5 million are foreigners. Among the top travellers to Halong Bay and the province are Chinese (296,000 arrivals in 2013) followed by Koreans (226,959 arrivals), Taiwanese (108,417 arrivals), French (76,546 arrivals) and Australians (74,622 arrivals).
Despite growing number of travellers, Halong Bay remains of stunning beauty with its tranquil waters from which emerge close to 2,000 limestone or schist islets lost in the midst of the Gulf of Tonkin.
swiss replica watches  chattimes.me
https://www.shoesincrease.com/