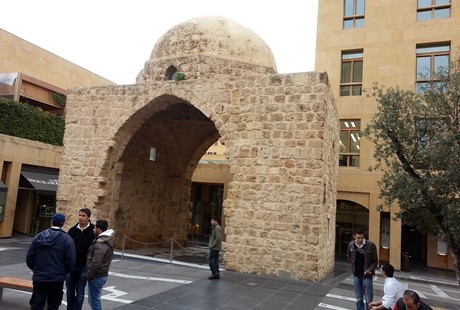 In downtown Beirut, there is a huge space known as the Souks Project. It is an entertainment complex featuring retail, restaurants and office buildings.

When you observe the area from the opposite sidewalk, a small dome is seen, incongruous in the midst of the modern construction. It is what remains of a zawiya, or a madrassa, built by a scholar mystic of the sixteenth century, and the only mamluk building still standing in the city.

In this area, the historic souks of Beirut were destroyed during the civil war. In 1992, a worker were digging out in the place where the souk Tawile was, and came across a small domed building. The bulldozer suddenly stopped, but eager to end his work, the man started up again, and tried to continue cleaning, but suddenly his hand became paralysed. Later, when he left the place, the paralysis disappeared.

The story that a miracle had saved the building spread fast. So, now you can still see now the mystic Zawiya, surrounded by modern day construction.