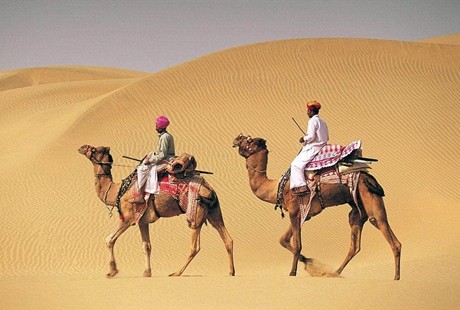 Bikaner is a vibrant, dust-swirling desert town with a fabulous fort and an energising outpost feel. It's less dominated by tourism than many other Rajasthan cities, though it has plenty of hotels and a busy camel-safari scene, which is attracting more and more travellers looking to avoid the Jaisalmer hustle.

Bikaner's atmospheric walled old city sits in what's now the southwest of the city, with Bikaner Junction, the main train station and Junagarh Fort, a fortress built in the sixteenth century that consists of 40 palaces with marble halls, polychrome rooms, antique ivory and wood, and mirrored ceilings. Within the enclosure some temples, courtyards, a Carrara marble pool with the Maharaja throne and a museum of hunting are still preserved. You also have to walk around the walls, the Bara Bazaar, the Jain temple and Lakshminath Bhandreshwar temple.

Few people come to Bikaner without taking a trip out to the notorious Karni Mata Temple at Deshnok, 30km south, where pilgrims worship thousands of holy rats. Less Brothers Grimm, but still fairy tale, is the small temple town of Kolayat, with its holy lake and religious fair, 51km to the southwest.

Around the full moon in January or very late December, Bikaner celebrates its three-day Camel Festival, with one day of events at the Karni Singh Stadium and two days out at Ladera, 45km northeast of the city.