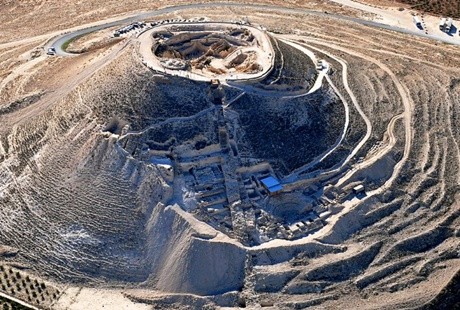 The volcano mound-shaped Herodium dominates the desert landscape south of Bethlehem. Named after Herod the Great, who built the circular fortified palace between years 24 and 15 BC. as an entertainment place and to celebrate the defeat of his rival, Antigonus. For a long time it was thought that it may hold his mausoleum, but nobody has been able to find a grave.

Towards the V century, the place became a monastery with cells and chapel. Carved Christian symbols are still visible. A huge tower and three semicircles can be seen, along with ruins of the baths of the palace, the triclinium and fragments of mosaics, all from the age of Herod.