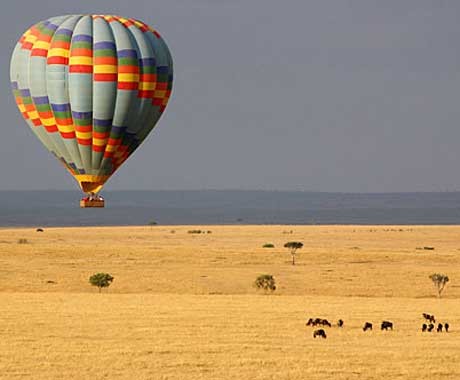 Elizabeth II, Hemingway, Chaplin and Roosevelt followed the trail of the Big Five on Kenyan lands, from Aberdare park to Lake Nakuru, Amboseli or Masai Mara reserve, home of the slender tribe of the same name. Now our travelers are especially taken their relief, seeking the adventure of Africa.

A balloon safari in Amboseli National Park, is a great opportunity to capture, from the air, the majesty of the landscape and wildlife moving freely, in a scenario that is famous for having the Kilimanjaro backdrop and home of large elephants’ herds.

Close your eyes and imagine for a moment that the control over your body is lost, and that it rises to the sky just starting to float; at this moment, and inside oneself, sounding repeated words, "I'm crazy, who rules me to ascend here!". It's what most people think when they flies the Amboseli sky With na air balloon, at the time that excitement and freedom seize from yourself, while the hot air goes up. These first impressions are converted into admiration and surprise when eyes open, majestic Kilimanjaro is visible, and Amboseli plains are speckled with many wild animals.