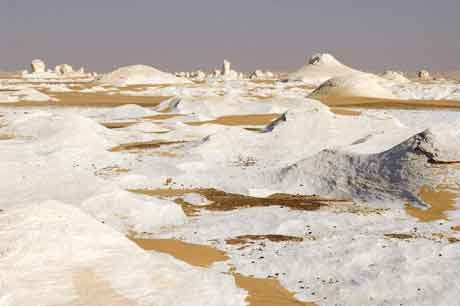 Oasis is a magic word that is often used to refer to a place to forget about the worries. Egyptian oases are intact and isolated refuges of the world.

Bahariya is the first oasis that one finds facing south from El Cairo and is characterized by its gigantic sand dunes. El-Bawiti, the main village, overlooks palm groves irrigated by a natural spring known since the time of the Romans.

The most isolated oasis is Farafra, and owes its fame to the strong traditions and the all-pervasive religiosity. The village, with same name, stands on the slopes of a hill and houses are painted in blue to bad luck ward off.

Dakhla is vast and made up of fertile areas where peanuts, vegetables and fruit trees are grown. Its inhabitants are distributed in several villages where traditional architecture is preserved.

But the most important is Kharga, formed by an impressive valley. Its capital, el-Kharga, the ancient Hibis of the Greeks, was at the center of the 40-Day Road, the infamous slave route between north and south Africa.