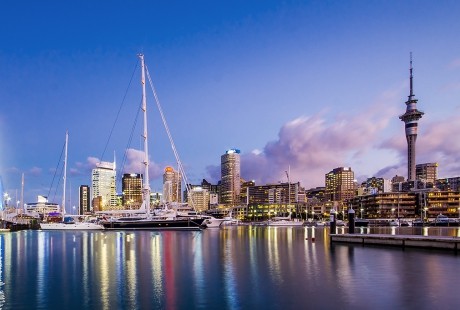 Auckland combines a large mix of European, Maori, Polynesian and Asian. Life in the most cosmopolitan city in New Zealand is relaxed. Known by the nickname the City of Sails, it is at the head in cities with more boats per capita in the world, with around 135,000 ships.

Kiwis love nature. Thus, the Auckland Domain is the largest park in the city, despite of being in the middle of the financial district. But there is more greenery with Albert Park, Myers Park, Western Park and Victoria Park. Surrounding the city, a few still virgin volcanic cones give an exotic aspect of the city perimeter.

It is worth visiting the Auckland Museum, where the largest collection of Polynesian artifacts in the world is exhibited, along with a large sample of Maori treasures.

The largest New Zealand city, offers to visitors its legends, adventure sports, its landscapes, its people, its islands, its ruins, its fertility and great food. A spectacular cocktail served in a long glass.