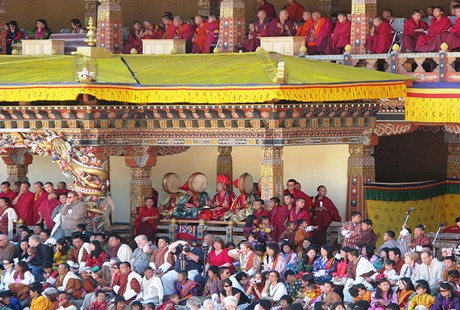 Bhutan offers the possibility of experiencing the charm and magic of one of the most enigmatic countries in the world, the last Shangrila, where the medieval kingdom joins the modern world, keeping its culture distinct and surprising.

In Bhutan, life revolves around the daily practices of kindness, compassion and peace. For centuries it remained closed to the rest of the world, until in 1974, when hypnotized its visitors opening to them, showing a virgin nature, an astonishing landscape, a magnificent architecture and charming people.

The country existed as a mosaic of small fiefdoms, always at war between them, until at the beginning of the seventeenth century was unified by the Tibetan lama and military leader Shabdrung Ngawang Namgyal. In the twentieth century, the country fell under the influence of the British Empire, and later under India, until it gained its independence. After centuries of absolute monarchy, they celebrated their first democratic elections in March of 2008.

Also known as Dragon Land is still considered one of the last Shangrila in the Himalayan region due to its remoteness, spectacular mountains, varied flora and fauna and ancient Buddhist monasteries. A destination that until today has escaped to the tourist globalization.

In NEPAL, the Goddess Kumari