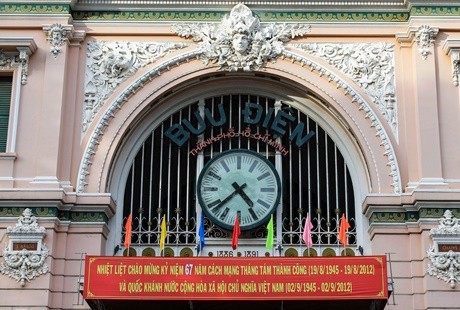 Ho Chi Minh City is the heart and soul of Vietnam, its the largest city, economic capital and cultural hub of the country. Among the places that our travellers should not miss when they come to the city are,

Notre Dame Basilica is of neo-romantic style and dates from 1883. It is a replica of Paris one, in the middle of a chaotic traffic.

The post office, one of the most beautiful buildings from the colonial era, designed in 1886 by Gustav Eiffel School.

Vinh Nghiem Pagoda is one of the most important Buddhist temples in the city. It is a worship place where offerings and prayers happens in front of the large Buddha’s statue.

The oldest pagoda in the city, Giac Lam. Built on the hill of Cam Son, keeps inside 113 statues, mostly wooden breadfruit carved, and painted in gold or red colors.

The Reunification Palace. During the Vietnam War, this was the presidential palace. It is remember since then, as a symbol of that war. One of the most interesting spaces is a bomb shelter, which was located in the basement.

Cho Lon neighborhood represents the major business center of the southern capital with a population of half a million Chinese origin people. Apart from the bustling market, they will see the Thien Hau and Phuoc An pagodas.

Finally, Cuchi Tunnels, located about 40 km. northwest of Saigon, one of the most famous historical vestiges of the Vietnam War. A network consisting of over 200 km. connected tunnels that form a huge maze, and that became a true underground city with kitchens, ammunition stores, medical clinics, meeting rooms and homes that allowed the guerrillas to hide from the enemy.